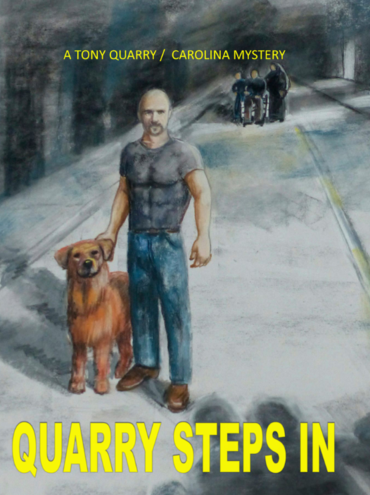 Enter Tony Quarry who, with his oversized golden retriever, Russ, rescues the terrified Adnan. An ex-con, Quarry is understandably concerned about anything that could jeopardize his reconstructed life, as is his wife, Tempestad. He served a prison term for the accidental death of a college student in a barroom brawl, years earlier.

But when Saba, Jabil’s wife and Adnan’s mother, turns to Quarry for help, Quarry steps in! Despite the protestations of Thamud, Jabil’s younger brother, Quarry organizes a 24-hour, neighborhood watch to protect the al-Hadramauts from the unknown assailant.

Thamud, furious, contacts Asar, the oldest brother, in Yemen. Asar, a selectively pious, anti-American Muslim, comes to America with three “cousins” to discourage Quarry while exacting revenge. Quarry refuses to be intimidated, nor will he abandon the al-Hadramauts until the terrorist is caught. It leads to a confrontation between Quarry and the largest of Asar’s bodyguards, Saif al-Din.

In his concern that Play-a’s bungling could pose a threat to his business, Ram-a-lam contacts drug kingpin, “El Manantial,” The Source, in Queens, New York. They arrange for a contract killer, Tajo “Slash” Barril, to murder Quarry, which leads to a potentially deadly confrontation.

While the police, with the assistance of Tempestad, attempt to identify Play-a from criminal and social service records, Quarry now faces a confrontation with T-Rex Jellicoe, Playa’s mentally challenged associate. Guileless and mindlessly loyal to Play-a, the three hundred pound behemoth is easily manipulated into attacking Quarry.

Once more, Quarry, an ordinary man, is called to contend with extraordinary events. As violence stalks him, Quarry is guided by his self-defense ability (karate) and his moral compass. It is the latter that lifts him to do the right thing and an unsought heroism.

Quarry Steps In, with protagonist Tony Quarry, is the second in the Tony Quarry /Carolina Mystery series. A third novel has already been completed and is under revision.